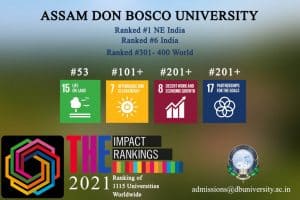 “Don Bosco University’s highest score is under UN SDG 15 with a score of 72.9 out of 100 which is ‘Life on Land’ where we are ranked #53 in the world and it is a testament of the eco-friendly green campus that the University prides itself”.

The Times Higher Education Impact Rankings are the only global performance tables that assess universities against the United Nations’ Sustainable Development Goals (SDGs). The ranking uses carefully calibrated indicators to provide comprehensive and balanced comparison across four broad areas: research, stewardship, outreach, and teaching. The 2021 Impact Rankings is the third edition and the overall ranking includes 1,115 universities from 94 countries/regions.