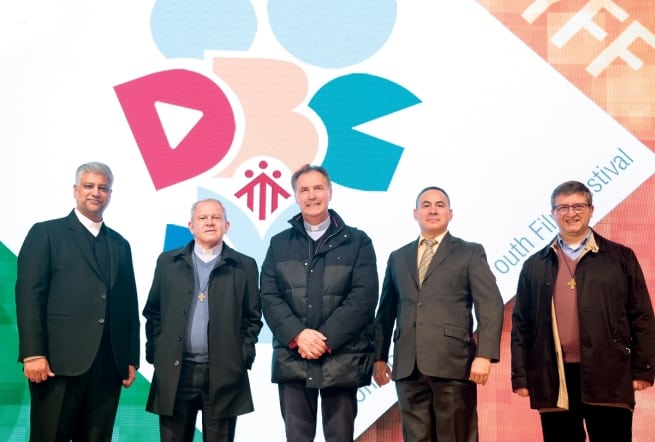 (ANS – Turín) – On November 18, in 50 countries around the world, the projections of the short films competing at the DBGYFF and the celebratory shows were held. On Friday 19 November, however, the final event was held in Valdocco, during which the winners in the various categories were announced.

The final ceremony of the “Don Bosco Global Youth Film Festival” took place, starting at 6 pm Italian time, at the Teatro Grande in Valdocco, in the presence of the Rector Major, Fr Ángel Fernández Artime, the Councilor for Social Communication, Fr Gildasio Mendes, and the Director of the Festival, Fr Harris Pakkam. Cristina Priarone, President of the “Italian Film Commissions” and member of the Grand Jury was also present.

After the welcome greetings from Br. Alberto Rodríguez, President of the DON BOSCO NEL MONDO Foundation, the explanation of the meaning and purpose of the festival and the path that led to its creation was presented. Later, the screening of some select short films belonging to the different categories in the race were screened. Those present and all those who followed the event live on Facebook were able to see and appreciate live action short films, music videos and animated short films. All the films, inspired by the theme “Moved by Hope”, were applauded by those present, who admired the originality, quality and great sensitivity that distinguished the young directors

The Rector Major then recalled: “Young people are capable of doing extraordinary things, even having only a mobile phone at their disposal.” The Successor of Don Bosco then expressed his joy in having hosted this great event precisely in Valdocco, imagining that Don Bosco and all the Salesian Saints were happy and proud of the goal achieved with this festival, characterized above all by the activities and creativity of the young.

In his speech, the Director of the Festival, Fr Harris Pakkam, thanked all those who made the festival possible. “This Festival is a dream that has come true, and we hope that it will continue to bear fruit in the future as well. We started to think about it, humbly, with a small team, to offer young people a space where they can express themselves,” he explained.

Ms. Priarone was also enthusiastic about the event, urging young people to continue chasing their dream of cinema because, more than any other art, cinema could give voice to emotions. “Being part of a jury made up of members from all over the world was an interesting experience. It must be said that occasions like this bring with them values ​​and open up a view towards contents, such as hope, which is always good to keep in mind,” said Cristina Priarone.

Together with the Rector Major, she announced the award winners, who connected through the Zoom platform. At the end of the award ceremony, then, Fr Harris Pakkam invited all those who worked on the Festival process itself to receive mementos from the Rector Major. Finally, a hymn to Don Bosco was sung.

Among the 6 BEST CONTINENTAL AWARDS, the BEST AFRICAN award was assigned to Moved by Hope, by Gilbert Olanya, Uganda; BEST ASIAN to Education is our Hope, by Daniel Jaojian Gangmei, India; BEST OCEANIA was won by Bart, by Angelo Dominic Aguila, Philippines; BEST EUROPEAN was The Light of Hope, by Szymon Gil, Tarnowskie Gory, Poland; BEST INTER-AMERICAN went to in Los Chicuras, by Alejandro Saavedra, Mexico; and BEST AMERICAN SOUTH CONE is Flying Machine, by Juliano Rocha, Gama, Brazil.

The event is still available for viewing on the Facebook of ANS and DGBYFF.