Spain – EUSS directs € 20,000 to scholarships due to savings generated by the closure of the facilities. 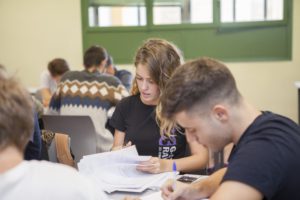 (Escola Universitària Salesiana de Sarrià, Barcelona) – The EUSS has increased by 20,000 euros the budget for scholarships of the Rinaldi Foundation for the 2020-2021 academic semester. This was possible due to the savings generated by the closure of the facilities due to the pandemic by Covid-19.

Although the budgets were approved in December 2019, including the EUSS scholarships, management and directive board have taken this measure to support students at a time of difficulty due to the consequences of the health crisis.

Traditionally, the EUSS had made separate calls for each type of scholarship, but due to the current situation, this year it was decided to make a general call to redistribute the budget at the time of granting student aid, depending on their needs.

The situation caused by the health crisis has been reflected in an increase in applications for scholarships: 143 in total, of which 81 for study aid, 53 for collaboration, and 9 Don Bosco. At the moment of evaluating the standards to grant the scholarships, family and personal situations have been taken into account such illnesses, Temporary Employment Regulation Records (ERDs), or unemployment.

The Rinaldi Foundation scholarships are compatible with those awarded by public administrations. In addition, once the course has started, and depending on the budgetary availability, a second call will be made to grant aid to students who were not able to obtain the scholarships.

With an educational tradition dating back to the late nineteenth century, the Salesian University School of Sarri is an institution of higher education that has as its mission the training and integral development of future engineers and industrial leaders, putting a special emphasis on the practical part of the studies and on the insertion of work, while encouraging active participation and a spirit of entrepreneurship.

The EUSS has launched the Engineering By Doing program, a training proposal that is structured from the perspective of developing students’ professional abilities. This program is the result of a project based on deliberation with the socioeconomic environment (entrepreneurs, university students, and social agents).