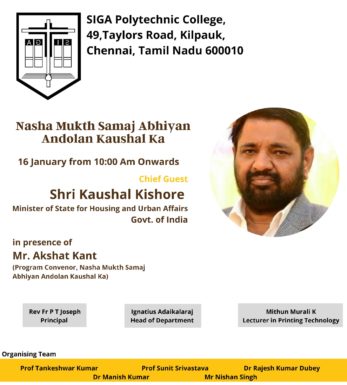 (SIGA Polytechnic, Chennai) –  “Awareness on Alcoholic Addiction and Drug Abuse among Youth”, a webinar as a part of the “Nasha Mukth Samaj Abhiyan Andolan” campaign was hosted by The Central University of Haryana and SIGA Polytechnic College in Chennai on January 16, 2022. The honourable Minister of State for Housing and Urban Affairs, Government of India, Shri Kaushal Kishore was the Chief Guest of the program.

“If young people make a promise not to use drugs, India will undoubtedly become a drug-free and self-sufficient nation”

The students of Don Bosco institution SIGA took an oath administered by the Minister, to abstain from drugs and alcohol. SIGA commits not only in skilling India in the field of Printing and Packaging Technology, but naturing their students to be good human and honest citizens.

Nasha Mukt Bharat Abhiyaan (NMBA) was formulated and launched by the Ministry of Social Justice & Empowerment which is the Nodal Ministry for Drug Demand Reduction on 15th August 2020, in 272 Districts across 32 State/Union Territories identified as most vulnerable in terms of usage of drugs in the country. As of now, the Ministry has covered more than 55 thousands institutions in India.

Under the aegies of The Vice Chancellor of Central University of Haryana, Professor Tankeshwar, the University has completed this campaign in about 50 universities, colleges, and schools across the country.

The Principal of SIGA Polytechnic College, Father Joseph gave the welcome address and the Head of the Department, Mr. Ignatius Adikalaraj proposed the vote of thanks. Mr.Akshat Khan was the convener of the programme and Mr Mithun Murali coordinated the programme.