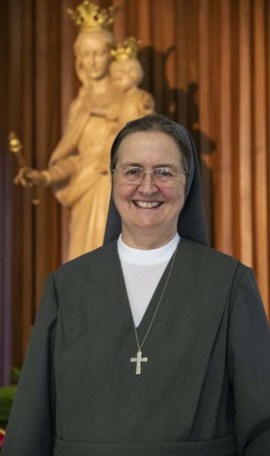 (ANS – Nizza Monferrato) – As part of the celebration of the 150th anniversary of the foundation of the Institute of the Daughters of Mary Help of Christians (FMA), this year the traditional “Feast of World Recognition” of the FMA towards their Superior wants to be an expression of gratitude to the Lord for the generous yes of Mother Chiara Cazzuola to the service of animation and government in the Institute. The festivities to celebrate the anniversary will last three days – from April 24 to 26 – and will take place between Mornese, Nizza Monferrato, and Turin, the places of the origins of the FMA.

The Thanksgiving Feast is a typical feast day of the Salesian family: it was born back in 1849 with the homage of two silver hearts offered to Don Bosco by Carlo Gastini and Giuseppe Buzzetti. Moved by the gift and the words that accompany it, Don Bosco sensed the educational value of this gesture and extended it to all Salesian communities, and still today FMA and Salesians celebrate this day of Thanksgiving.

This year, moreover, there are several especially joyful reasons for the celebration of the Feast of World Recognition of the FMA: first of all, it will be the first Thanksgiving Day for Mother Chiara Cazzuola, elected as Superior General of the Institute in October 2021. Secondly, the feast will provide a reason for the new Mother General to visit Nizza Monferrato for the first time, a central place in the history of the development of the Institute. Finally, and above all, this year has a very special significance for the Salesian Sisters, as it marks the 150th anniversary of their Institute’s foundation.

Precisely because of this year’s special importance, the Thanksgiving Feast, which usually falls on April 26th, has been extended to three days. On Sunday 24th April, in the morning, Mother Chiara Cazzuola shall participate in the activities of the SYM Day in Turin with the meeting of the young people and the Mass in the Basilica of Mary Help of Christians. Both events will be streamed live through social networks. In the evening, in Mornese, the FMA Mother General shall preside a meeting with the young people in formation from different Provinces.

On Monday, 25, the day opens with Mass with the young women in formation – also transmitted via live streaming – and a second meeting with the young FMA in formation, but this time conducted digitally to reach novices and juniors from around the world. In the afternoon, back in Turin, Mother Chiara Cazzuola will receive the worldwide homage of her Sisters in the celebration of the World Feast of Thanksgiving with a ceremony that will take place in the Teatro Grande of Valdocco and that will also be accessible via live web.

On Tuesday, 26th, the feast will continue in Nizza Monferrato. The FMA Mother General will arrive at the shrine “Our Lady of Grace” of Nizza Monferrato in the morning, welcomed by the children and young people of the local Salesian schools. While the celebration for the youngest will be expressed with tournaments and games, Mother Chiara Cazzuola shall also be meeting several FMA Provincials and Rectors. In the afternoon, she will visit the premises of the vocational courses and have a chance to admire a historical re-enactment that will retrace in some scenes the salient and significant moments of the life of the Daughters of Mary Help of Christians in Nizza Monferrato.

Then, after the exhibition of the flag-wavers, the Eucharistic celebration will take place – transmitted in live streaming and presided over by the Bishop of Asti, Monsignor Marco Prastaro – and after the Mass, the Mother General will receive, on behalf of the Institute, the honorary citizenship from the mayor of the city, Simone Nosenzo.