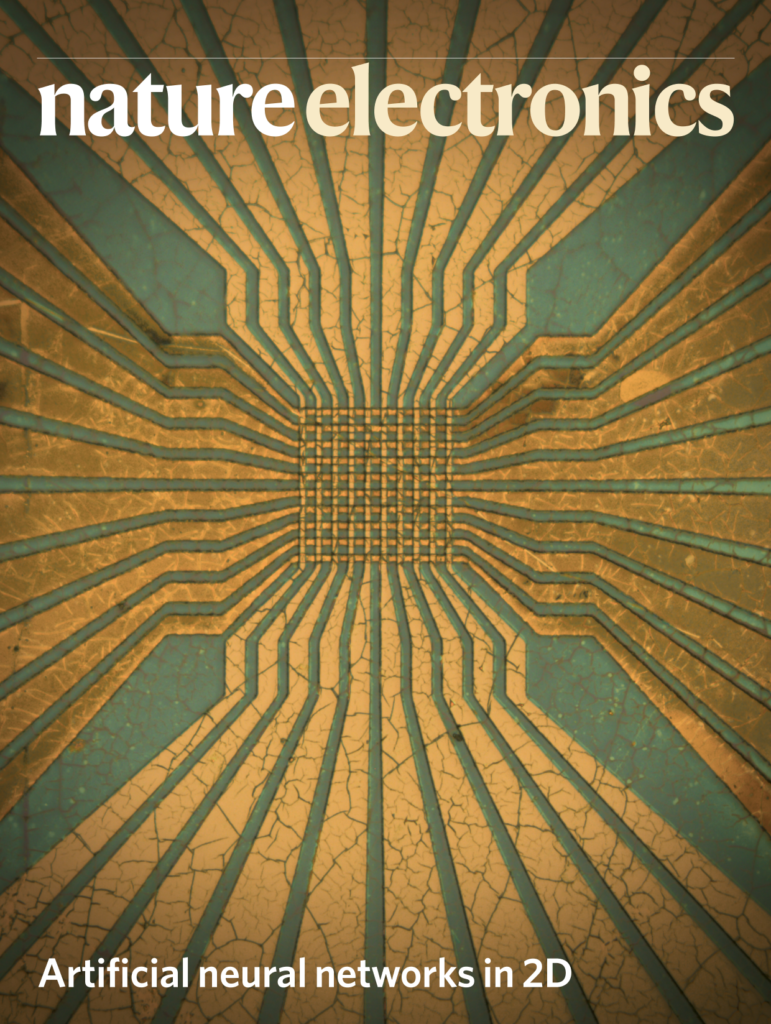 (Escola Universitària Salesiana de Sarrià, Barcelona) – “Artificial neural networks in 2D” is the cover article by the research group led by Professor Mario Lanza, for the October issue of Nature Electronics, one of the most prestigious in the world of science.

The article features the innovative research project that Lanza and his team carry out at Soochow University (China) in nanoelectronics with two-dimensional materials, which has resulted in the creation of an artificial neural network for image recognition.

The group has developed robust two-dimensional memory circuits, or high-density memristors, using a material called hexagonal boron nitride. Only 100% industry-compatible processes (such as chemical vapor deposition and wet transfer) have been used in manufacturing, allowing full wafers filled with memristor matrices to be produced (in parallel).

These devices display unique performance, showing an ultra-low energy consumption of 8.8 ZJ and up to 25 stable states with linear analogue transition between them. One of the breakthroughs is the great reproducibility of the results. For the first time since discovering two-dimensional materials, a yield of over 98% and very low variability (up to 1.53%) has been achieved.

All these properties have made possible using two-dimensional circuits to emulate an artificial neural network for image classification, with an accuracy of 98.02%.

The results achieved represent a significant advance in nanoelectronics and artificial intelligence, which is why they have attracted the attention of the scientific community. The prestigious journal Nature Electronics has featured them in their October issue as cover. Even a leading company have shown interest in introducing these devices within their lines of production.

The pioneer group led by Mario Lanza in China has focused on the research of two-dimensional dielectric materials, insulating electricity, and developing practical applications in the field of electronic memories and artificial intelligence.

This is the third article by Professor Lanza featured and published in the Nature Electronics magazine in the last three years, a milestone never reached by any other European researcher that places him in the world elite nanoelectronics and two-dimensional materials.

Mario Lanza graduated in Electronic Engineering from Escola Universitària Salesiana de Sarrià (EUSS) and is an outstanding member of the EUSS Alumni. Mario also actively collaborates with the university and living up to its motto “Praeit ac Tueur,” which translates to “protect and guide,” referring to former students’ protective and exemplary tasks offered to current students.

With an educational tradition dating back to the late nineteenth century, the Salesian University School of Sarri is an institution of higher education that has as its mission the training and integral development of future engineers and industrial leaders, putting a special emphasis on the practical part of the studies and on the insertion of work, while encouraging active participation and a spirit of entrepreneurship.

The EUSS has launched the Engineering By Doing program, a training proposal that is structured from the perspective of developing students’ professional abilities. This program is the result of a project based on deliberation with the socioeconomic environment (entrepreneurs, university students, and social agents)