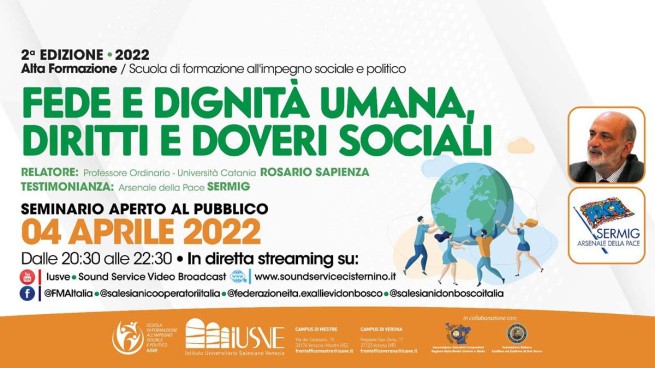 (Istituto Universitario Salesiano de Venezia) – “Faith and human dignity, social rights, and duties” is the theme of the second meeting open to the public of the School of Higher Education for social and political commitment promoted by the Association of Salesian Cooperators and the Italian Federations of Past Pupils (men and women) of Don Bosco in collaboration with the Salesian University Institute of Venice (IUSVE).

The appointment is scheduled for next Monday, April 4, at 20:30 (UTC +2), and will see as a speaker Prof. Rosario Sapienza, Professor of International Law at the Faculty of Law, University of Catania. Immediately after Prof. Sapienza’s lecture, there will be the testimony of several young people of the “Arsenal of Peace – SERMIG”, the group of Youth Missionary Service of Turin, founded by Ernesto Olivero.

It will be possible to follow the event live on the IUSVE YouTube channel and the Facebook pages of the Daughters of Mary Help of Christians Italy, Salesians Don Bosco Italy, Salesian Cooperators Italy, Middle East and Malta, and the Italian Federations of Past Pupils of Don Bosco.

Monday’s meeting is the second in the training program of the second edition of the School of Higher Education for Social and Political Commitment promoted by the two great lay branches of the Salesian Family (Salesian Cooperators and Past Pupils) to bear witness to the education received at the school of Don Bosco in the social sphere.

The project, which also involves the IUSVE for didactic and scientific support, foresees a high-level training path centered on the Social Doctrine of the Church articulated according to Salesian charism, and aims at forming Upright Citizens committed in and across the world for a better future.

The course is divided into eight live streaming training sessions, all scheduled on the first Monday of the month from March to December 2022 (with a summer break in July and August). The appointments, which are introduced by Marina Busso, SSCC, and Valerio Martorana, ExDB, specifically aim to:

• To prepare groups of people who in turn will be formators of Salesian associations and movements in the territories;

• Foster times and spaces for thought and personal and community practice of the Social Doctrine of the Church.

Just a few days ago, on Saturday, March 19, at the IUSVE campus in Mestre, a ceremony was held to award certificates of participation to the students of the first edition of the School. During the event, the students were also able to present their projects.