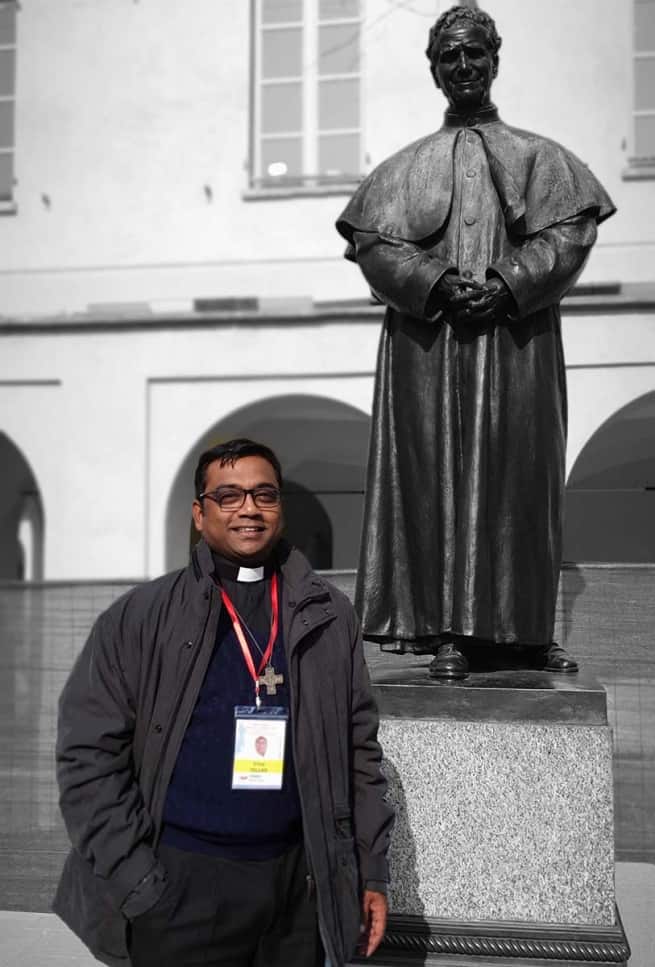 (Salesians of Don Bosco, Province of Panjim) – In the year that the Salesian Province of St. Joseph Vaz is celebrating 75 years of Salesian presence in Goa, the province is blessed with a new provincial designate in Fr. Clive Telles. He was nominated on 21 June 2022 by Rev. Fr. Angel Fernandez Artime, the Rector Major of the Salesian Congregation and 10th Successor of Don Bosco. Fr. Clive Telles will be succeeding Fr. Felix Fernandes who has been ably leading the province as its provincial superior since 2016. The province has 105 confreres and 18 houses in the Indian States of Goa, Karnataka, and Maharashtra.

Fr. Clive Justin Telles was born to Mr. John Telles and Mrs. Inacinha Telles on 20th August 1976. His siblings consist of two elder sisters Carol and Christine and a twin brother Claude. His dad has passed on to eternal life.

At an early age, Clive expressed the desire to be a priest and joined class VIII at the Salesian aspirantate at Don Bosco Lonavala. After completing his higher secondary education, he joined the Pre-Novitiate at Bosco Udyogshala Pinguli. He completed his novitiate studies in Nashik and made his first profession on 24 May 1996. He completed his Philosophy studies at Divyadaan, Nashik, and his Theology at JDV, Pune. Fr. Clive Telles was ordained a priest on 18 December 2006 in Goa. He has a Bachelor’s in English, a professional degree in Education (B.Ed), and also a Master’s in Education.

As an educationist, he has served as a teacher and in administrative roles in various schools of the province in the three states of Goa, Maharashtra, and Karnataka. He served as an administrator for 3 years at Don Bosco, Kelmbet. He was then appointed Principal of Don Bosco High School & Junior College at Sindhudurg, Maharashtra for seven years of which the last three years he was also the Rector of the Institute. He is currently the Vice-Provincial and the Principal of Don Bosco Higher Secondary at Panjim, Goa.

Fr. Telles dreams of a Province in which confreres continue to cherish their calling to be Salesians. “My Life for Youth” was his motto for Profession and Ordination, and he wishes that it continues to be his motto during his service as provincial superior. It is interesting that Fr. Clive used the superscript in “Youth” to describe the double dedication of life to YOU (Jesus) and to YOUTH.

The new provincial will begin his service on 7 September 2022 after the installation ceremony officiated by the Rector Major who is scheduled to visit Goa in September.