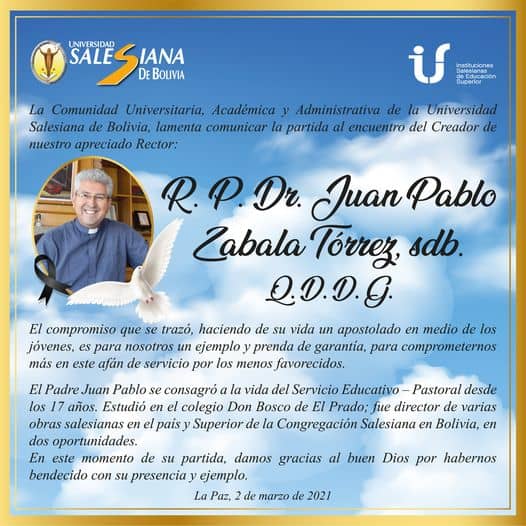 (Universidad Salesiana de Bolivia, La Paz) – With deep sadness, but at the same time with the certainty that the Merciful Father has already welcomed him into Heaven, the Salesian community of Bolivia (BOL) announced that yesterday, Monday 1 March, BOL Provincial, Fr Juan Pablo Zabala Torrez, SDB, died in the city of La Paz, due to COVID-19. “Let us pray for his eternal rest and give thanks to God for his life and ministry,” said the religious of the “Our Lady of Copacabana” Province.

Fr Zabala was born on 15 January 1965 in La Paz, Bolivia. He carried out his novitiate at Santa Eulalia, Peru, made his first religious profession on 12 February 1985 and perpetual profession on 31 January 1992 in La Paz. On 24 September 1994, he was ordained a priest in La Paz-El Alto.

In 2005 he assumed the government and animation of the Salesian province of Bolivia as the first Bolivian provincial to assume this responsibility. At the end of his mandate, he is sent to Rome where, after several years of study and research, he obtains the title of Doctor of Philosophy from the Salesian Pontifical University.

Upon his return to Bolivia, in 2018 he assumed the position of Rector of the Universidad Salesiana de Bolivia. And in 2020 he is again elected to the inspector service, a position that he assumes on August 17, 2020