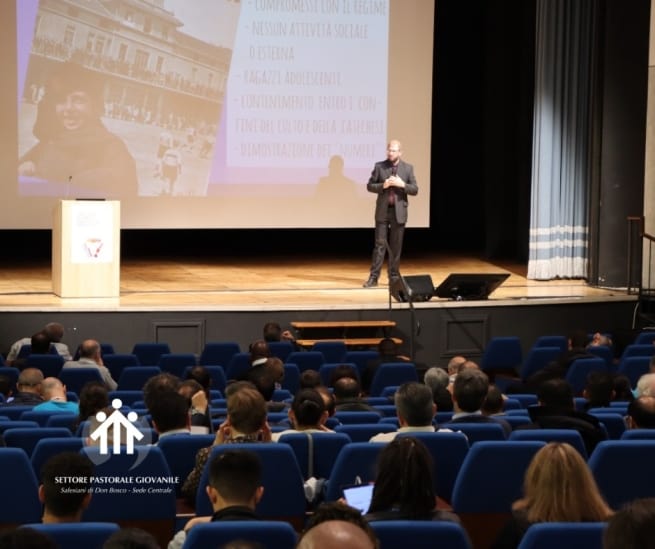 (ANS – Turin) – The work of the International Congress of Salesian Works and Social Services proceeds. Gathered at Valdocco, the 300 delegates representing all of the Congregation’s Provinces and Vice-Provinces continued their in-depth study of issues inherent to the service of human promotion in the style of Don Bosco.

Following the lengthy program of activities, the morning opened with the Lectio Divina curated by Fr. Rafael Bejarano, Reference Person for Social Works within the Youth Ministry Department and Congress coordinator, and Mr. Javier Carabaño Rodriguez, a specialist in communication and identity and linked to the Salesian environment. The two illustrated a new reading of the Gospel episode of the resurrection of the son of Nain’s widow: if on the first day only the contrast between the world of joy, animated by the presence of Jesus, and the world of sorrow, represented by the people of Nain, had emerged, now

“the encounter between the two groups is presented as a confrontation between two opposing forces from which a winner must emerge. Where Jesus appears, everything will be permeated by His love, and cannot pass through people’s lives without radically changing things in them.”

Even today, the two Lectio Divina guides affirmed, “when Jesus turns His gaze toward us, we cannot help but be fascinated, the personal encounter with Him makes us reborn. His mercy gives each person a new beginning.”

Enlivened by such encouragement, the assembly was then able to attend the lecture offered by Fr. Michal Vojtas, Vice-Rector of the Salesian Pontifical University in Rome, on the theme, “The evolutions of the social dimension in Salesian education and pedagogy.”

Starting from the analysis of Don Bosco’s social action toward the poor and abandoned, in a narrow sense, and of his commitment to all young people of the working classes, in a broader sense, Fr. Vojtas traced the history of the social work of the Salesians and all their collaborators from the end of the 19th century to the early years of the third millennium, observing the different rhythms and ways in which the social dimension of the Salesian charism has played out over the decades.

In the period between the 1800s and 1900s, for example, Fr. Vojtas considered how “following the strategic line of the founder, there was a balance between a traditional mentality and innovations at the practical-organizational level. Salesian education creatively adapted by reinventing some of its activities and structures to the new needs.”

During the rectorships of Fr. Michele Rua and Fr. Paolo Albera, he added further, “the situation of working-class neighborhoods, the workers’ question and the stimuli of Rerum Novarum led – also in the oratories – to a remarkable broadening of the educational perspective polarized toward the educational goal of “preparing young people for life (…) The intermediate position of the oratory between society and the Church guaranteed a ‘sacredness’ different from the parish and a ‘profanity’ different from the world of political movements. With the richer educational offerings, the oratory became from festive to daily as well.”

On the rectorate of Fr. Pietro Ricaldone (1932-51), Fr. Vojtas reported how the central concern was to safeguard Salesian works in Italy from the excessive meddling of the Fascist regime, which is why the Salesian boarding school assumed the status of a “fortress that prevents the influences of difficult times.”

While after the Second Vatican Council and the opening to the modern world, the UPS Vice-Rector further explained, social dynamics came to influence the whole educational-pastoral proposal, especially with the methodology of social planning. This prepared the ground that would flourish in the period of John Paul II’s pontificate when in the Salesian sphere one noticed the increasingly frequent opening of social works, especially for young people in difficulty or “at risk” and for migrants.

Coming to the most recent years, and in tune with the magisterium of Pope Francis, Fr. Vojtas finally traced the current trend: “In the Salesian Family of the third millennium, it seems that the attention to the social goes in a direction that calls the Salesians to found not only ‘special works’ but precisely ‘new presences’ according to a new preventive system, shared with co-responsible laity, which promotes both the logic of the new evangelization and the attention to the social context, poverty, and the peripheries.”

At the end of the enlightening report, and after a Q & A session, the activities continued with the mini-courses and sharing of good practices that had started yesterday, Sept. 29.