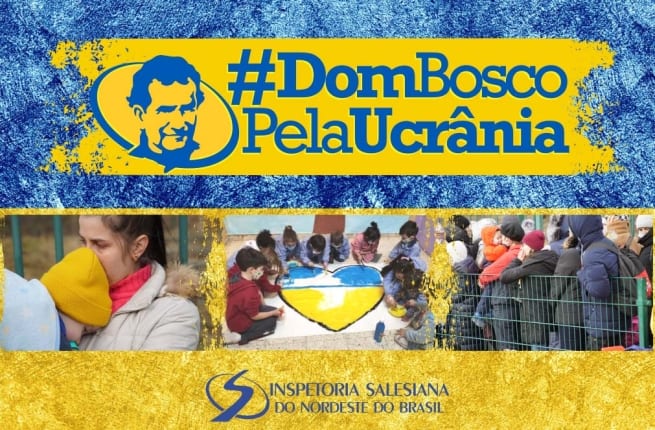 (ANS – Recife) – The situation of the suffering of the Ukrainian people in this time of war has prompted the entire Salesian Family, at all levels and in every place, to act in a spirit of solidarity and support. The Salesian Province of Brazil-Recife (BRE), animated by a decision of the Provincial and his Council, has summoned the communication contacts of the works to give life to a solidarity campaign, which officially began yesterday, March 30, 2022.

The campaign already has a face and a body: “DOM BOSCO PELA UCRÂNIA” (Don Bosco for Ukraine) with the use of the hashtag #DomBoscopelaUkrania for social networks. It began at noon local time yesterday with the publication of videos and fact sheets on the social profiles of the Salesian works of BRE, and with announcements on Salesian radios, and re-proposed in the messages of the “goodnights” and the moments of preaching. The campaign will conclude on the second Sunday of Easter, April 24.

The Salesians of Brazil have already jointly sent aid to Ukraine. But also the Salesian Province of Northeast Brazil, at this time, felt the need to join in a specific way in solidarity with the Salesian regions who are suffering and much tried by this war. Thus, following the decision of the Provincial and his Council, all Salesians, educators, young people, and families who animate the Salesian presence in BRE have been called to make a gesture of solidarity in favor of Ukraine.

In the spirit of Lent, all are invited to give up something to share it with those who need it most and are urged to animate their neighbors in solidarity: in the family, in youth groups, in classrooms, in the parish..

The donations will be collected in a bank account and sent by the Province to the Salesian organizations in Ukraine. BRE’s Provincial newsletter, “Nordeste Hoje”, will run a daily column reporting on campaign activities.

Fr Francisco Inácio, BRE Provincial, recalled the commitment of the Church and the Congregation in supporting the war-affected populations during the opening of the meeting of the provincial communication contact persons held in digital mode on Tuesday, March 29. On that occasion, he also emphasized what has already been accomplished through the Conference of Salesian Provinces of Brazil (CISBRASIL) that has recently participated in this solidarity effort; but he remarked the value of the provincial campaign in its educational aspect, which can involve young people, families, educators, and communities.

During that same meeting, the campaign materials were also presented and delivered: a press release, a video about the Salesians in Ukraine, fact sheets for social networks, a poster, a video to publicize the campaign, and a radio advertisement. All materials are accessible on Google Drive.