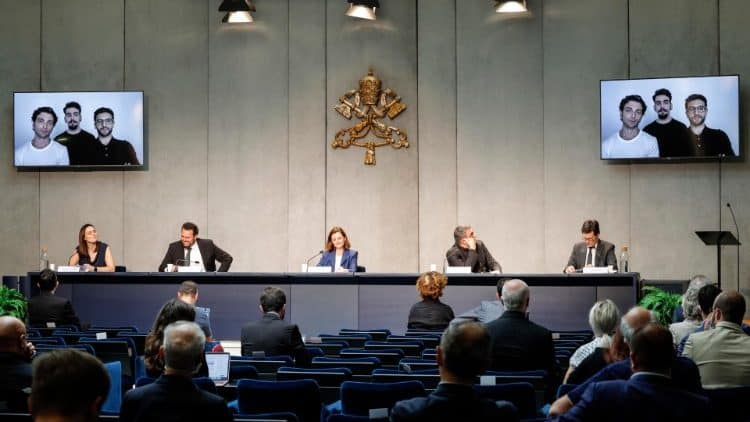 (Salesian Youth Ministry, Rome) – Antonella Sinagoga, member of the Sector for Salesian Youth Ministry, psychologist, Salesian Cooperator (together with Fr Giorgio Zazza SDB Parish Director of S. Maria della Speranza in Rome) will be present at the main event in Rome which will be attended by delegates from Episcopal Conferences from around the world, as well as representatives of international movements involved in family ministry.

A press conference is held on Tuesday at the Holy See Press Office to announce details of next month’s World Meeting of Families, which will take place in Rome from June 22-26.

In less than a month’s time, the city of Rome will host the World Meeting of Families, which was last held in Dublin in 2018.

With preparations well underway for the event, a press conference was held on Tuesday at the Holy See Press Office to announce details of the Meeting, which will take place from 22- 26 June.

Among those participating in the briefing was Professor Gabriella Gambino, Undersecretary at the Dicastery for Laity, Family and Life.

Speaking to the assembled journalists, she said that despite delays due to the COVID-19 pandemic, dioceses in Rome and around the world were gearing up for the X World Meeting of Families.

The Meeting, which has as its theme, “Family love: vocation and a path to holiness”, will open on Wednesday, 22 June, with the Festival of Families in the presence of Pope Francis in the Paul VI Hall.

From Thursday 23 to Saturday 25 June there will be the Pastoral Congress, which will also take place in the Paul VI Hall.

On Saturday afternoon there will be Mass in St Peter’s Square presided over by the Pope, and on Sunday there will be the Angelus.

Announcing details of the Pastoral Congress, Professor Gambino said it would be unlike those of previous editions. She explained that it will not have academically structured conferences with theological-doctrinal content, but will be a moment of meeting and listening.

The aim, she continued, “is to develop the theme chosen by the Pope, taking into account some strong indications emerging from Amoris laetitia, a text that presents itself with very clear programmatic lines for the possible developments of family pastoral care in the coming years.”

The Congress will be built around five main conferences on a number of fundamental themes, such as difficulties of families in today’s societies; the preparation of couples for married life; and some situations of ‘existential periphery’ within families.

Speaking about the Festival of Families, Mons. Walter Insero, Director of the Social Communications Office for the Diocese of Rome noted, that it would be the opening event of the Meeting and will be entitled “The beauty of the family.”

Mons. Insero highlighted that collaborating on the Festival of Families will be the Vatican Dicastery for Communication, Vatican Media, the Italian broadcaster RAI and the Social Communications Department of the Diocese of Rome.

The Festival will also feature testimonies from families, as well as performances from artists, including Italian singing trio, Il Divo.

During questions from journalists, those on Tuesday’s panel were keen to stress that this World Meeting of Families will be an international event that will strive to welcome families from poorer nations. There will also be representation from Ukraine.

Asked about participation by LGBT families, Professor Gambino said that in the spirit of Amoris laetitia it was important to accompany everyone with mercy and welcome towards the love of the Father, and that all families need to feel accompanied by the Church.

In a letter read out during the press conference, the Pope’s Vicar General for the Diocese of Rome, Cardinal Angelo de Donatis, wrote that the first married couple to be declared Blessed, Luigi and Maria Beltrame Quattrocchi will be the patrons of the X World Meeting of Families.