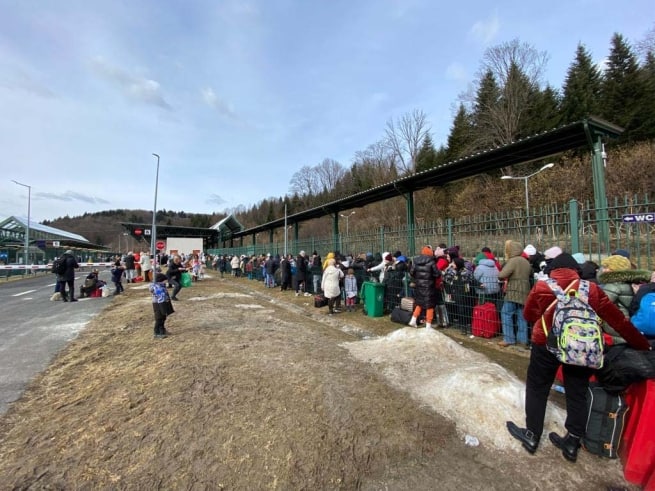 (ANS – Rome) – Throughout the Salesian world, there is no counting the number of activities undertaken in support of the Ukrainian population, victims of the war. Initiatives of prayer and of sensitization to peace, as well as demonstrations of solidarity, have sprung up and spread almost spontaneously in all the realities of the Salesian Family.

Specific campaigns have been launched, especially by Salesian organizations best prepared to face emergencies, to offer material aid according to need.

A complete list of what Salesians around the world are doing is not yet available. But among the reports received by the ANS, thanks also to the work of the Bureau for the Coordination of Salesian Mission Office and the management of emergencies, we can include and highlight the following for now:

The efforts of the Province of Lombardia-Emilia Italy (ILE) to fund the construction of an air-raid shelter for the children of Lviv. The campaign is being carried out in collaboration with the Foundation “Opera Don Bosco onlus”, of which Fr Giordano Piccinotti, SDB, is President.

From Spain, the Salesian Mission Office in Madrid, “Misiones Salesianas”, has also taken action and has already allocated the first funds to cover basic needs.

“The Salesians have asked us for immediate help to guarantee water, long-life food (canned food, rice, polenta, pasta, baby-food in jars) to the people housed in the shelters. They need mattresses, beds, sleeping bags, thermal blankets, and sleeping mats, as well as products for personal hygiene (soaps, toothpaste, toothbrushes, diapers) and medical supplies such as bandages, plasters, disinfectants and saline solutions,” reports “Missioni Don Bosco” of Turin, which during the month of February was present in Ukraine with one of its delegations.

The Irish Salesians have also announced that they have started a collection of basic necessities and funds for the Ukrainian emergency:

And the same happened in Germany, where “Don Bosco Mission Bonn” launched its fundraising campaign.

Last, but not least, the campaign already launched by the Salesian Mission Office in Warsaw from the very first hours from the outbreak of war.

Also, in the face of the emergency, the Don Bosco Youth Net, the European network of Salesian youth organizations, has also been activated, spreading among its partner organizations indications and guidelines on information and communication, work for the rights and reception of refugees, and the organization and participation in solidarity, charity, and peace awareness initiatives.